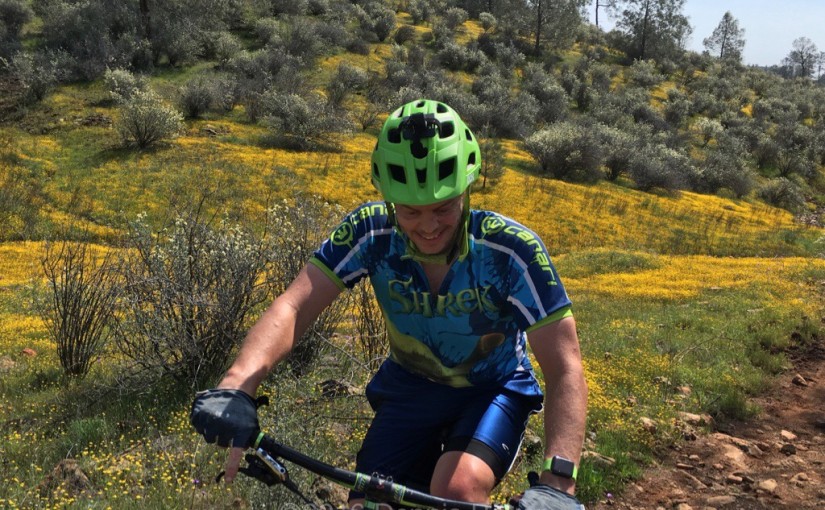 Bruce suggested we meet at Red Hills this Sunday and knowing the flowers were going to be in full festival colors I decided to hop onto the ride. Along with Bruce and I, George, Josh, and Uncle Matt showed up to enjoy the day.

When we got there the parking lot was already hopping, the days where Red Hills is a quiet, empty park are apparently long past. We saddled up and headed out west on the boundary trail. I was a bit worried about my legs since I’d done yoga and logged 35 miles on the RLT, but apparently my fears were overblown, the legs were a bit sore but I was able to bob up the chunky/ rocky slog out of the parking lot to the boundary trail. George was right on my tail the whole way riding his fat tired Salsa.

As with much of Red Hills, the Boundary Trail forks in a few places and we took the fork which stays to the east side of the creek which is smoother. We followed that around to where it merged back into boundary then crossed the creek which separates the north and south “halves” of Red Hills. At the creek crossing we took the newer switchback trail up to the ridgeline and the “Firehose” trail then down to Middle Earth.

Middle Earth trail and the lower portions of Soaproot are some of the best sections of Red Hills and this time of year they are particularly spectacular. The creeks have been flowing and the flowers are just completely insane this year. The first photo in the gallery is right before the last climb out of Middle Earth near where it crosses the creek and it’s just stunningly beautiful.

From Middle Earth we climbed up past the UFO and to Soaproot Trail… the Soaproot downhill is one of my favorite pieces at Red Hills, there aren’t any pictures from it becauseÂ we were blazing down it at full speed. Soaproot is only moderately challenging and it’s as fast as you want to ride it. Riding the green JET today I was standing on the pedals most of the way with a huge shit eating grin the entire time.

We crossed Six Bit Gulch and took the last lower portion of Soaproot a bit slower, but it’s still chunky good stuff with lots of little technical bits and some short steep challenge sections to keep you on your toes. From the bottom there are some great views of Lake Don Pedro at the end of the gravel road.

We dropped down an unmarked/ seldom used trail which dropped in near the back entrance to the park which was rather fortunate because it was crossing the creek on the way up to the road where Matt’s free hub gave out entirely with an audible “PING!”

Matt and Josh split off from the rest of us and we took a classic route out along old Stagecoach. As with most of the older routes through Red Hills that meant going up and over a few ridges, but the weather was great and the dirt was amazing so the miles just flew past.

At this point, Bruce’s legs were flagging a bit and after finding an Indian Paintbrush to add to his flower photo collection, George was ready to hightail it out too so we took a fairly direct route to the exit via the Boundary Trail.

Another awesome TROGs ride and a great day collecting photos of flowers and bombing some really great trails.