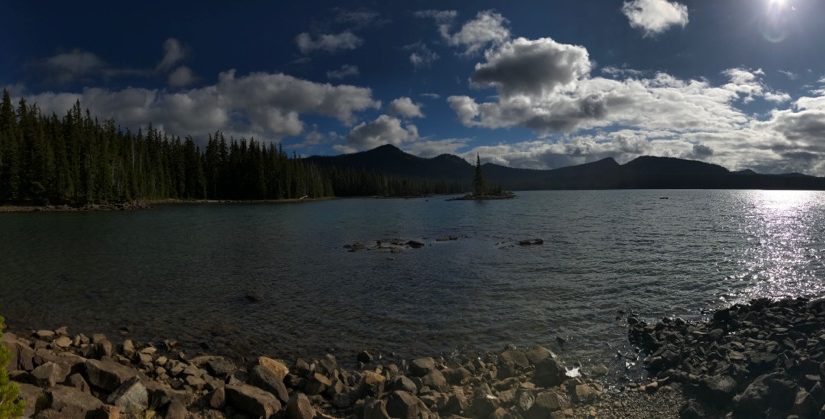 This post is part of a multi-post story about a 1 week trip we, started in Bend.

After another cold night I was just starting to figure out how to best deal with sub freezing temperatures and slept the entire night without having me feet go numb. I work up early again and was treated to another awesome sunrise, this time over Coltus Lake.

Breakfast was French Toast again and we headed around the north shore of Coltus and caught the Metolious Windigo again as it wound it’s way towards Lake Waldo. The Metolious Windigo is a lot less volcanic here without the rocky road texture which made it so fun between Sparks Lakes and Lava Lake. This section has a lot of deadfall and we cleared a couple trees along the way. 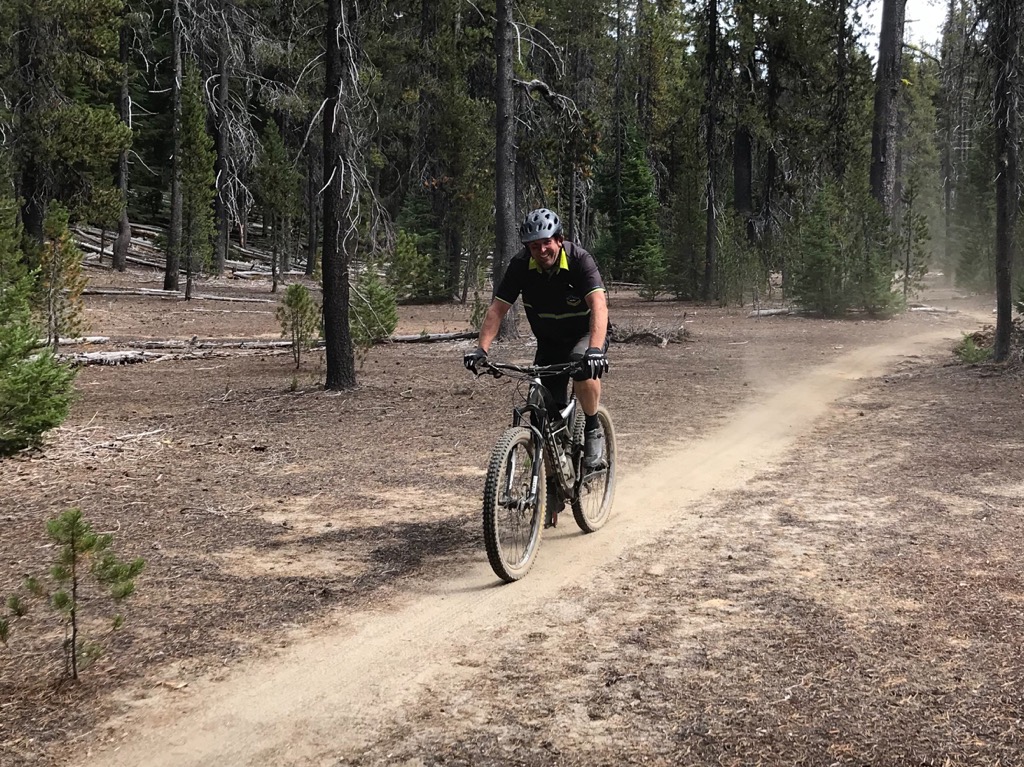 After curving around Lake Coltus, we passed Deer Lake and Coltus Mountain, eventually leaving the Metolious Windigo for good and climbing towards Charlton Lake and Lake Waldo. (Photo is Jerry shortly before Charlton Lake)

On the leg just before we turned off of Metolious Windigo, a branch snagged on my rear tire and snapped a spoke. I finished the ride with 27 spokes on one wheel. 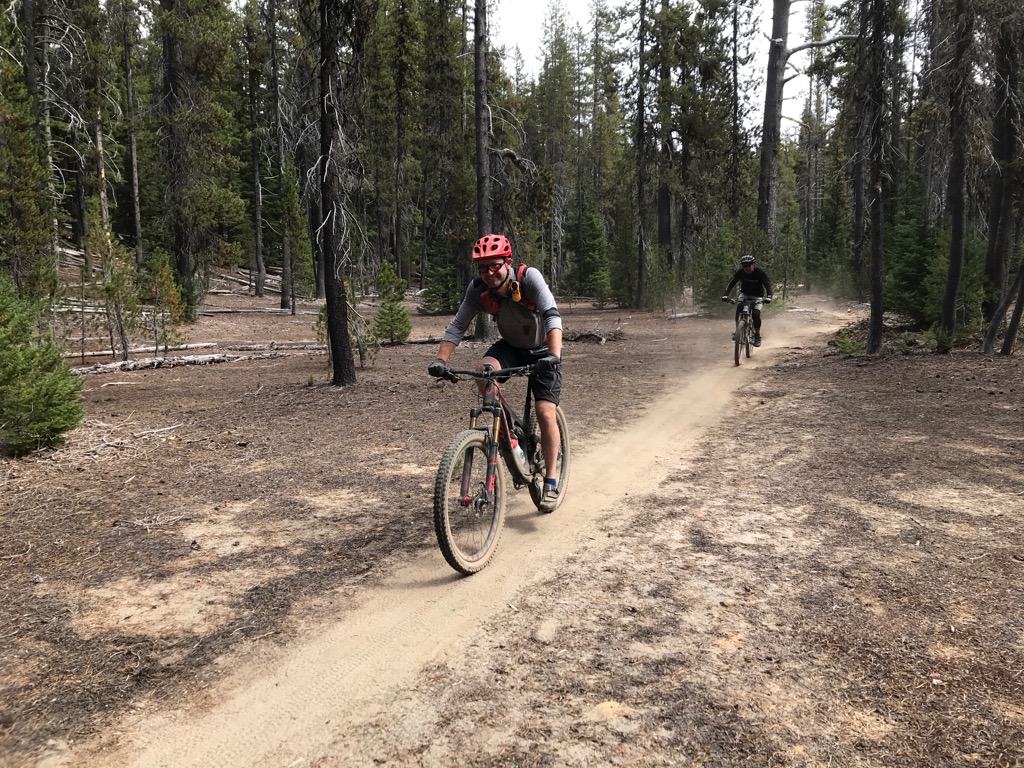 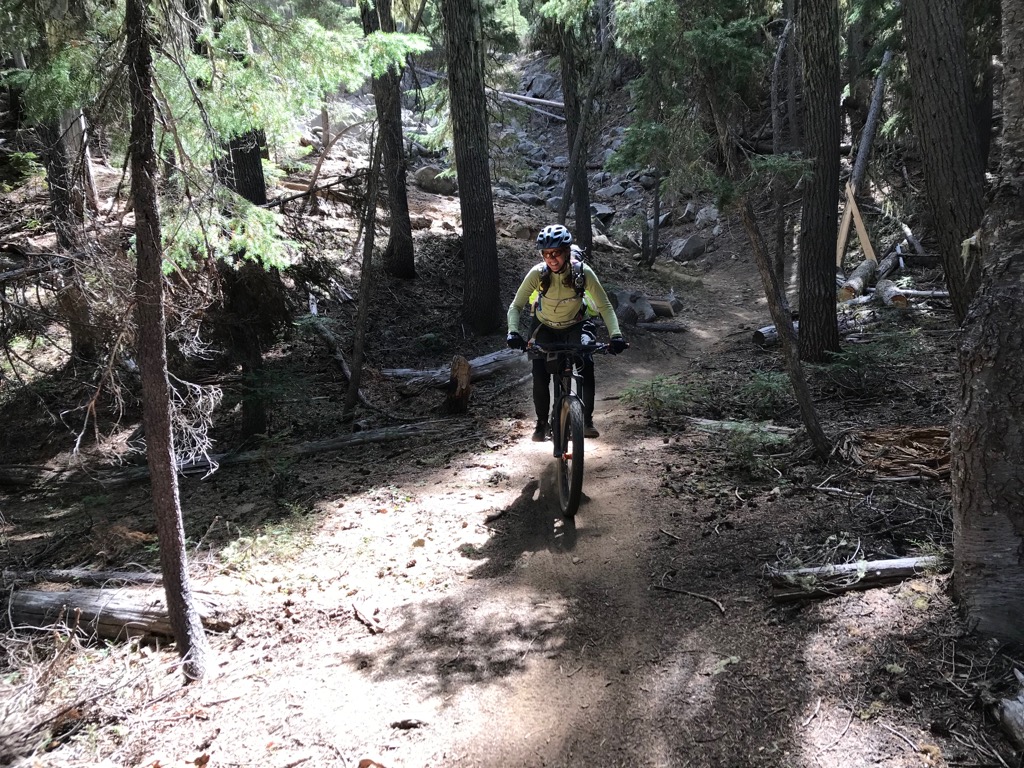 This leg of our trip had a lot of climbing and only a few really good downhill legs, but the section approaching Charlton Lake has some of the only really challenging technical terrain before we get to Fuji and Bunchgrass later on. (Pictured is Gabrielle just below a tight technical S-curve)

Lake Waldo is always beautiful and Shadow Bay campground was quiet due this late in the season.

We had propane bowl heaters to keep us warm and they were definitely appreciated as it was quite cold most of the time when we were at Waldo. (Pictured: Jerry, Dan, Scott, Davey, Al, Lee, and Gabrielle)

There wasn’t a ton of partying on Tuesday night as we were all quite beat from a long day with a lot of climbing. Since it was Tuesday Dinner was of course Tacos! (Pictured: Ken, Kevin, Ogre, Andrea, Josh, Jerry, Dan, and Scott)

With 28 miles of riding which felt like mostly climbing, it’s hard to pick out a highlight. The section before Charlton Lake and a couple of the downhill sections along East Waldo were quite fun though.

We woke up to a light rain in the middle of the night which was a bit of a blessing. It knocked the dust on the trails down a bit and kept the temperature a bit warmer.